The following article, written by Professor Blakers, Anna Nadolny, and Ryan Stocks, was published in the Conversation today, and republished on Renew Economy.

In eight years, Australia wants to be four-fifths powered by renewables. Solar and wind investment is pouring in. But to firm the renewables and overcome the intermittency, we need overnight energy storage. That’s why there’s so much interest in pumped hydro.

At its simplest, pumped hydro involves two dams, one high on a hill and one down in a valley, with pipes and turbines connecting them. You store electricity by pumping water uphill to the upper reservoir on sunny and windy days – and turn it back into power at night or during calm or cloudy days by letting the water flow back downhill through a turbine. Think of this system as a giant “gravity battery”, where electricity is turned into gravitational potential energy and back again.

The question now is: where are the best locations? Last year, we released a global atlas of more than 600,000 greenfield locations for pumped hydro. These are sites where there is no existing reservoir. About 4,000 of those are in Australia, including the site for Queensland’s newly announced 5 gigawatt Pioneer-Burdekin pumped hydro scheme.

Now we’ve identified 1,500 new Australian sites in our new bluefield atlas. Bluefield refers to locations with one reservoir already in place, meaning only one new reservoir needs to be built. Existing reservoirs already have a social licence and are usually publicly owned. None of our sites require damming major rivers.

Because we have so many good options, we can afford to be choosy. We can go all the way to 100% renewables while only developing the very best sites. 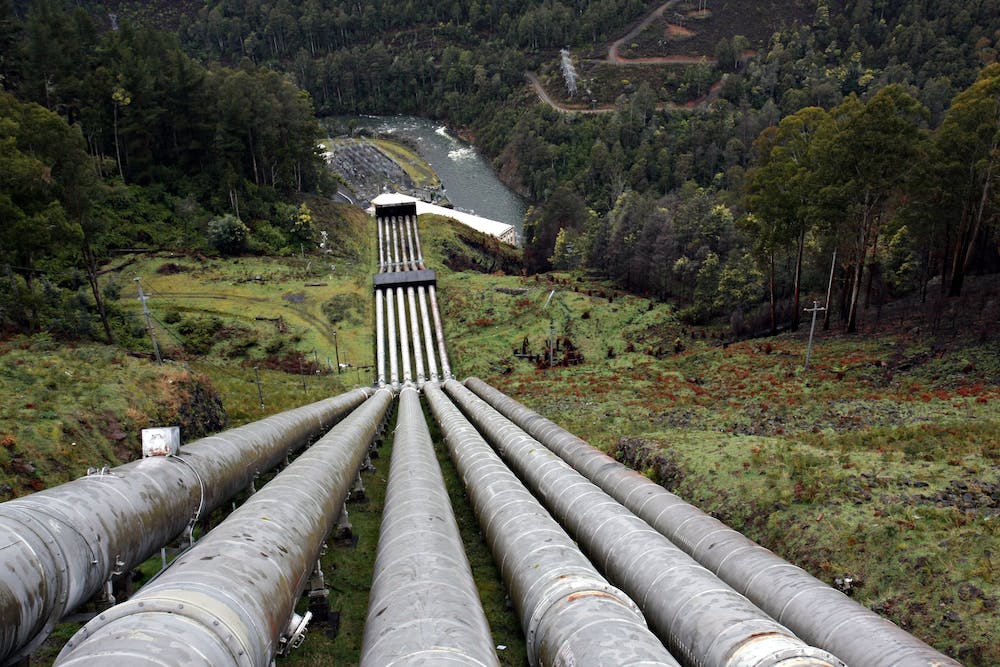 The difference in height make a big difference to power generation - so site selection is key. Shutterstock

Why do we need atlases of these sites?#

The world doesn’t have much energy storage right now – and the storage we do have is almost all pumped hydro, co-located with hydroelectric schemes on rivers.

What’s new is that we have found vast opportunities for these projects without new dams on rivers.

We need a lot more energy storage than we now have to support solar and wind. Grid-scale batteries are useful for short-term storage – minutes to hours – but pumped hydro excels at overnight and longer storage.

Creating these atlases showed our energy planners and leaders that pumped hydro storage is effectively unlimited – Australia has 300 times more storage potential than we would need for a fully renewable grid.

Despite their advantages, bluefield sites are not necessarily better than greenfield sites even though they only need one new reservoir. That’s because greenfield sites may excel in areas such as the head – the crucial difference in altitude between the two reservoirs which makes energy generation possible. 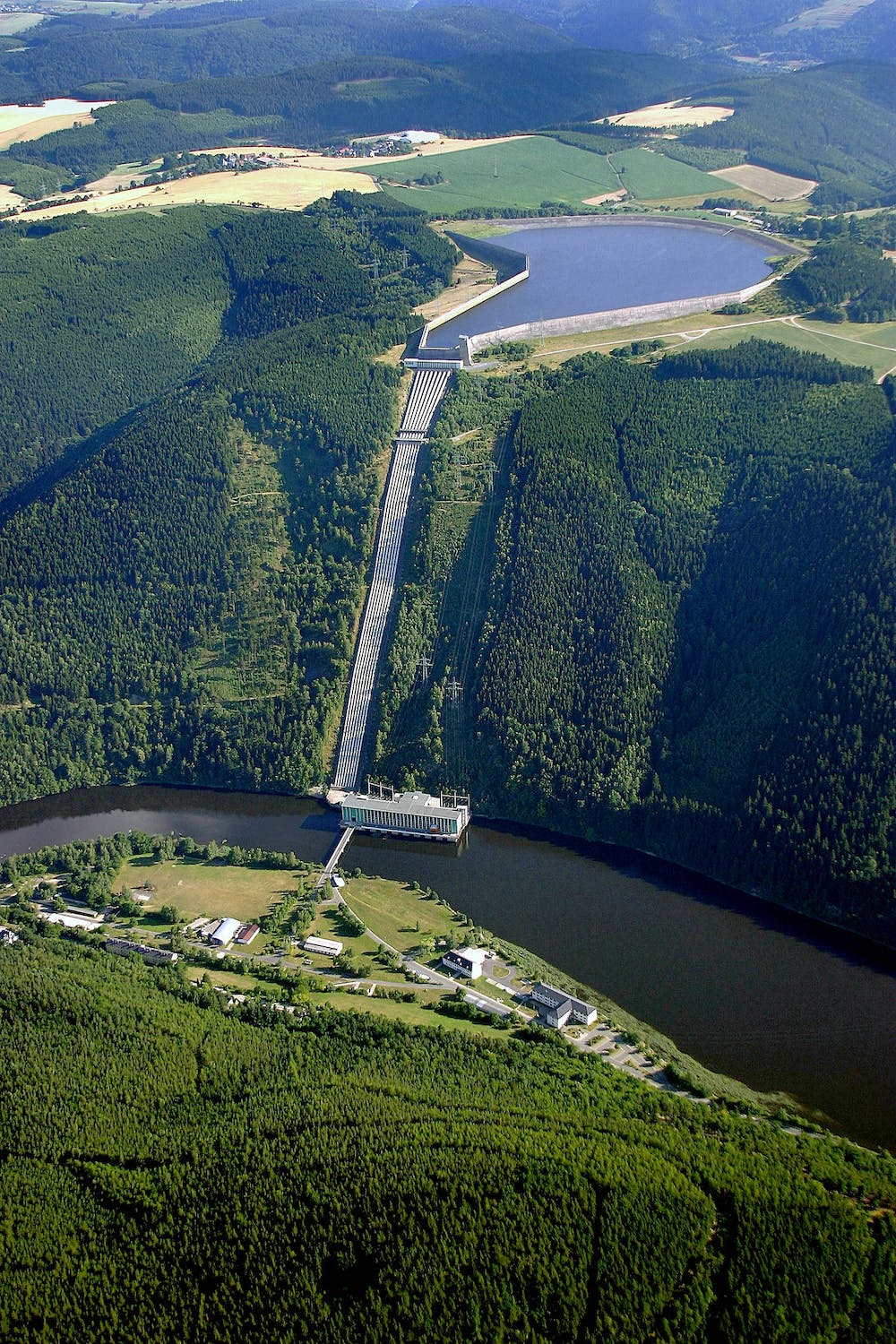 Pumped hydro relies on the difference in height between two reservoirs, as in this photo of the Hohenwarte II scheme in Germany Vattenfall/Flickr

So what have we found? An abundance of choice, with pumped hydro storage options ranging from 2 to 500 gigawatt hours (GWh). To put that into perspective, 500GWh is enough to supply all of Sydney’s electricity for about four days.

For comparison, the Kidston project under way in Far North Queensland and the Snowy 2.0 pumped hydro expansion will provide 2GWh and 350GWh, respectively. Queensland’s recent plans are a 50GWh scheme inland from the Sunshine Coast at Borumba, and the enormous 120GWh Pioneer-Burdekin project west of Mackay.

We have rated each of the 1,500 bluefield sites based on cost, where top-rated options are expected to have half the capital cost of the most expensive, per unit of storage.

Where are the best options?#

The Snowy Mountains have large numbers of excellent sites of all sizes, located not far from the Snowy 2.0 scheme. If we built reservoirs at the three largest, we’d have double the storage capacity we’d need to support a 100% Australian renewable energy system when everything is electrified and there are no fossil fuels. That’s because the amount of storage needed to support a clean grid is actually quite modest. 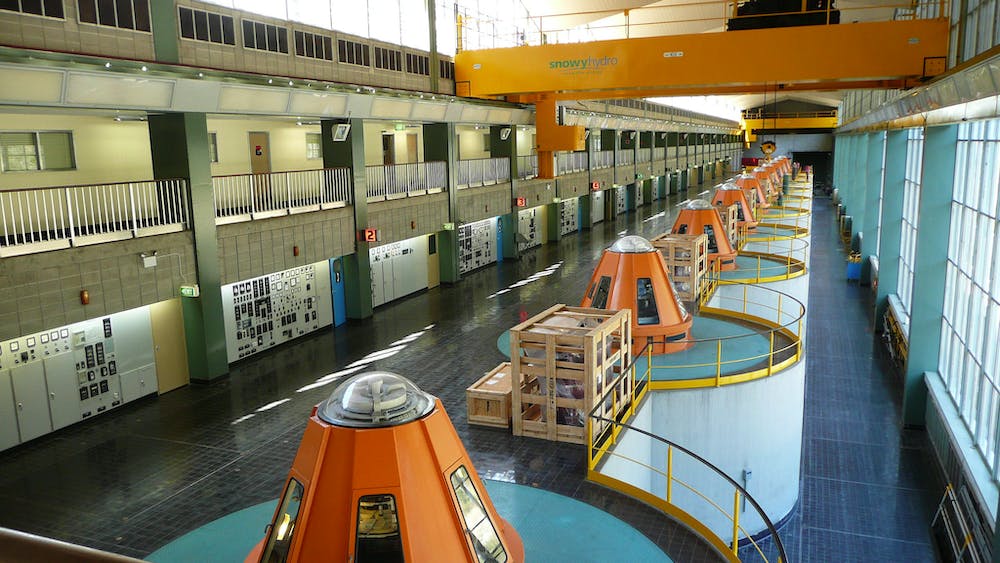 To store Queensland’s vast solar and wind wealth, you could have pumped hydro at Teemburra, Eungella, Cressbrook, Tinaroo and others as well as the two schemes at Borumba and Pioneer-Burdekin.

Tasmania is already at 100% renewable energy based on its wealth of hydroelectricity. Many of these facilities could host pumped hydro too and back up Victorian solar and wind when the new Marinus Link undersea transmission cables are completed.

What about Western Australia? There are a few options, but not nearly as many or as good as in the east. The pick of them are the Harvey, Brockman and Dandalup reservoirs near Perth. South Australia and the Northern Territory have some good options too.

What about the environmental impact?#

You might see the word “dam” and think twice. But these aren’t the river-stopping megaprojects of old.

Pumped hydro doesn’t have to be on a river at all. None of the 5,500 potential greenfield or bluefield sites we’ve identified require new dams on major rivers.

What about resource use? Pumped hydro is a resource miser.

Water? For a 100% renewable grid, we’d need about three litres of water per person per day to fill the reservoir and offset evaporation. That’s about 20 seconds of your morning shower. Once full, the water can be used and reused for 50 years or more, with only top-ups to offset evaporation. Land? About three square metres of land per person would have to be submerged – the area of a double bed.

Two decades ago, people worried we’d have to invent new technologies to decarbonise. But the resurgence of pumped hydro suggests this fear was misguided. Older, proven technologies can do the job just fine.

This work was funded by the Australian Renewable Energy Agency

This article is republished from The Conversation under a Creative Commons license. Read the original article.