An article by Andrew Blakers appeared in The Conversation today, and was republished in Renew Economy.

You might feel despondent after reading news reports about countries doubling down on fossil fuels to cope with energy price spikes.

Don’t. It’s a blip. While the Russian invasion of Ukraine has led to a temporary fossil fuel resurgence, it also accelerated Europe’s renewable ambitions. And the United States and Australia have finally passed climate bills. This week, federal energy minister Chris Bowen announced “Australia is back” on climate action.

There’s better news too. In March this year, the world hit one terawatt of installed solar. By 2025, the world’s polysilicon factories are predicted to bounce back from supply shortages and churn out enough high-purity silicon for almost one terawatt of solar panels every year.

Best of all – Australia could show the world how to add solar to their grid. You might not suspect it, but we’re the global leaders in finding straightforward solutions to the variability of solar power and wind. We’re showing that it’s easier to get carbon emissions out of electricity generation than many predicted. 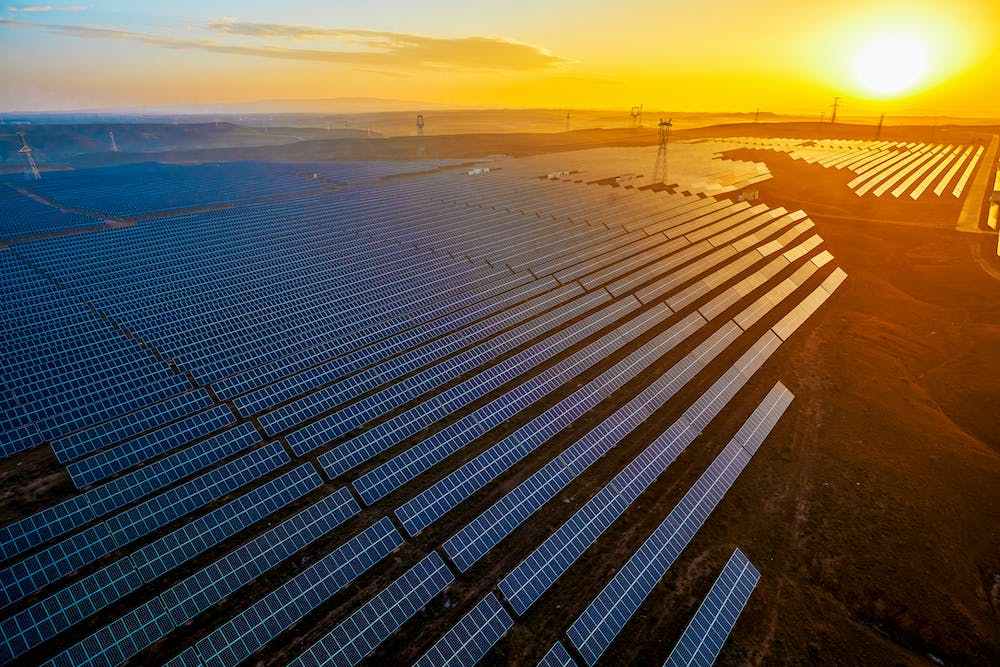 Solar power will ramp up sharply, if supply chain investment is any guide. Shutterstock

This surge in the renewable supply chain allows sustained exponential growth that is already disrupting fossil fuel markets in some countries, notably Australia.

This year, global fossil fuel prices have skyrocketed in the wake of the Russian invasion of Ukraine. In turn, that’s generated intense interest in solar and wind energy to boost domestic energy security, particularly in Europe, which needs to wean itself off Russian gas.

While fossil fuels are concentrated in countries such as Russia, Saudi Arabia and Australia, solar and wind resources are widely distributed. Most countries can generate all their own energy from the sun and wind.

Europe could readily become energy independent, harnessing its enormous North Sea offshore wind resources and solar in the south. Even densely populated countries such as Japan and Indonesia have far more solar and wind resources than they need.

Solar and wind now provide the cheapest new electricity generation in most markets. As a bonus, the widespread uptake of solar and wind will eliminate many of our worst air pollutants and improve our health.

Why are solar and wind winning?#

In a word, cost. Solar and wind have won the race for the energy of the future because they are cheap. Once built, the fuel is free, and does not need to be imported or dug up.

Wind and solar are being built three times faster than everything else combined. It follows they will dominate future energy markets as existing fossil fuel generators retire and electricity use grows rapidly. 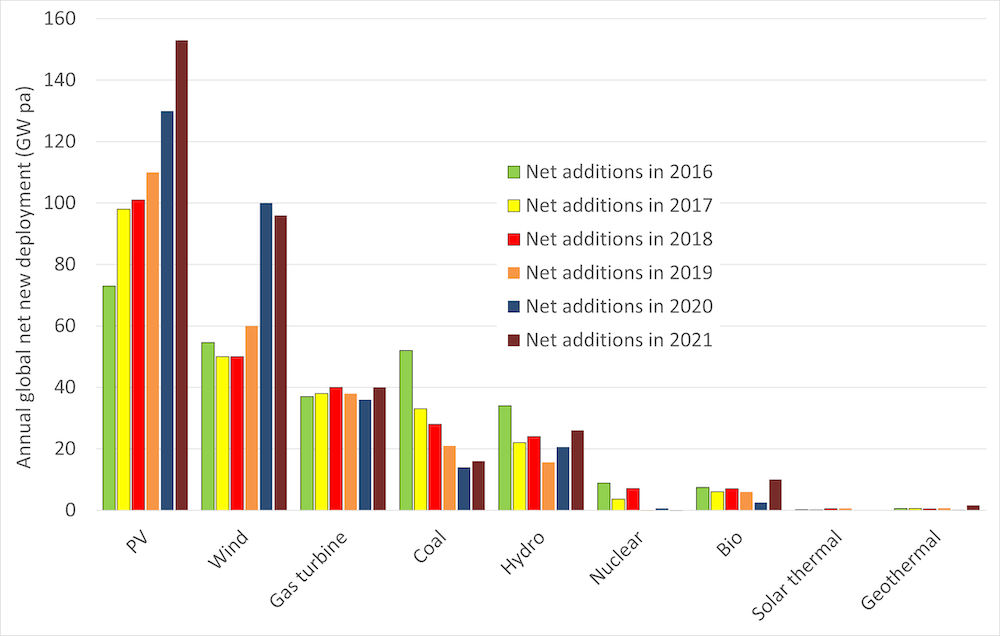 Nuclear generation hasn’t grown in the past decade. Coal and gas plants able to capture and store carbon have not got traction in the energy market. Hydroelectricity can’t expand much further. There will, however, be a huge market for off-river pumped hydro energy storage.

There are no serious technical, environmental or material constraints to solar power on any scale. However, solar has been hit by supply chain issues in recent months, with major price spikes in polysilicon. These are common to any rapidly growing industry, and should resolve as more suppliers see the opportunity and enter the market.

There is enough land#

Most of the world’s population live at moderate latitudes with good sunshine on most days. Here, solar is effectively unlimited. Those further north have abundant wind energy (particularly offshore wind) to offset weaker solar in winter.

Sceptics point out you need more land or sea to produce the same amount of electricity as fossil fuel plants. While true, solar farms can happily coexist with livestock and cropping to create a double income for farmers. The solar electricity needed to power the world and eliminate all fossil fuels can be generated from about 1% of the land area devoted to agriculture.

Most of the global population lives between the 35th parallels (the red lines) where there are good solar resources. Redder areas mean better solar. World Bank, CC BY

Once we have cheap clean electricity, we can use it to eliminate the use of fossil fuels altogether by electrifying nearly everything: transport, heating, industry and chemical production. This could reduce emissions by three quarters.

Global electricity production will need to rise sevenfold to about 200,000 terawatt-hours a year to give everyone the energy needed to reach developed nation living standards. But this is not all that hard over the next 30 years. And the alternative – keep pumping warming pollutants into the atmosphere – will make the lives of our children harder and harder.

Annual solar deployment needs to double every four years to get the job done by 2050–60 – similar to the global growth rate achieved over the past decade.

Australia can show the way#

You might not think it, given the decade of political climate wars, but Australia is the world leader in terms of solar electricity produced per person. 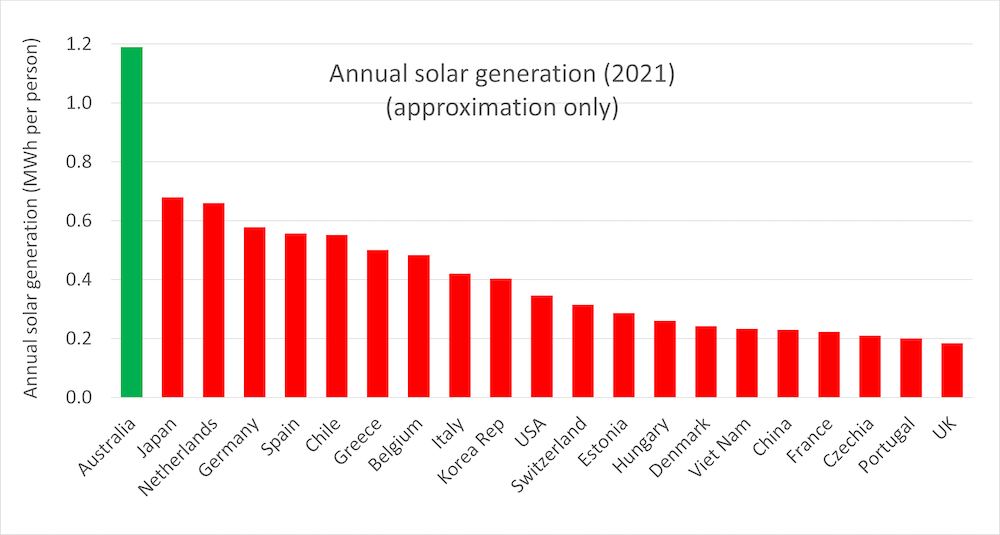 In Australia, solar and wind are booming while coal is rapidly falling. We’re already on track to reach 80-90% renewables by 2030. Remarkably, our per capita solar generation is twice as large as the second placed countries (Germany, Japan and the Netherlands) and far ahead of China and the USA.

Australia is quietly demonstrating how to accommodate huge new flows of cheap, clean electricity. The world will soon follow suit.

This article is republished from The Conversation under a Creative Commons license. Read the original article.

The banner image is from Shutterstock.