Close search
Skip table of contents
On this page

As the proportion of wind and solar photovoltaics (PV) in an electrical grid extends into the 50-100% range a combination of additional long-distance high voltage transmission, demand management and local storage is required for stability [1, 2]. Pumped Hydro Energy Storage (PHES) constitutes 97% of electricity storage worldwide because of its low cost.

We found about 616,000 potentially feasible PHES sites with storage potential of about 23 million Gigawatt-hours (GWh) by using geographic information system (GIS) analysis. This is about one hundred times greater than required to support a 100% global renewable electricity system. Brownfield sites (existing reservoirs, old mining sites) will be included in a future analysis.

Detailed global visualization is available at the NationalMap website, which is a Government spatial data platform for the Australian energy industry.

Detailed spreadsheets for any part of the world are available upon request.

If you like our work then please write and tell us! 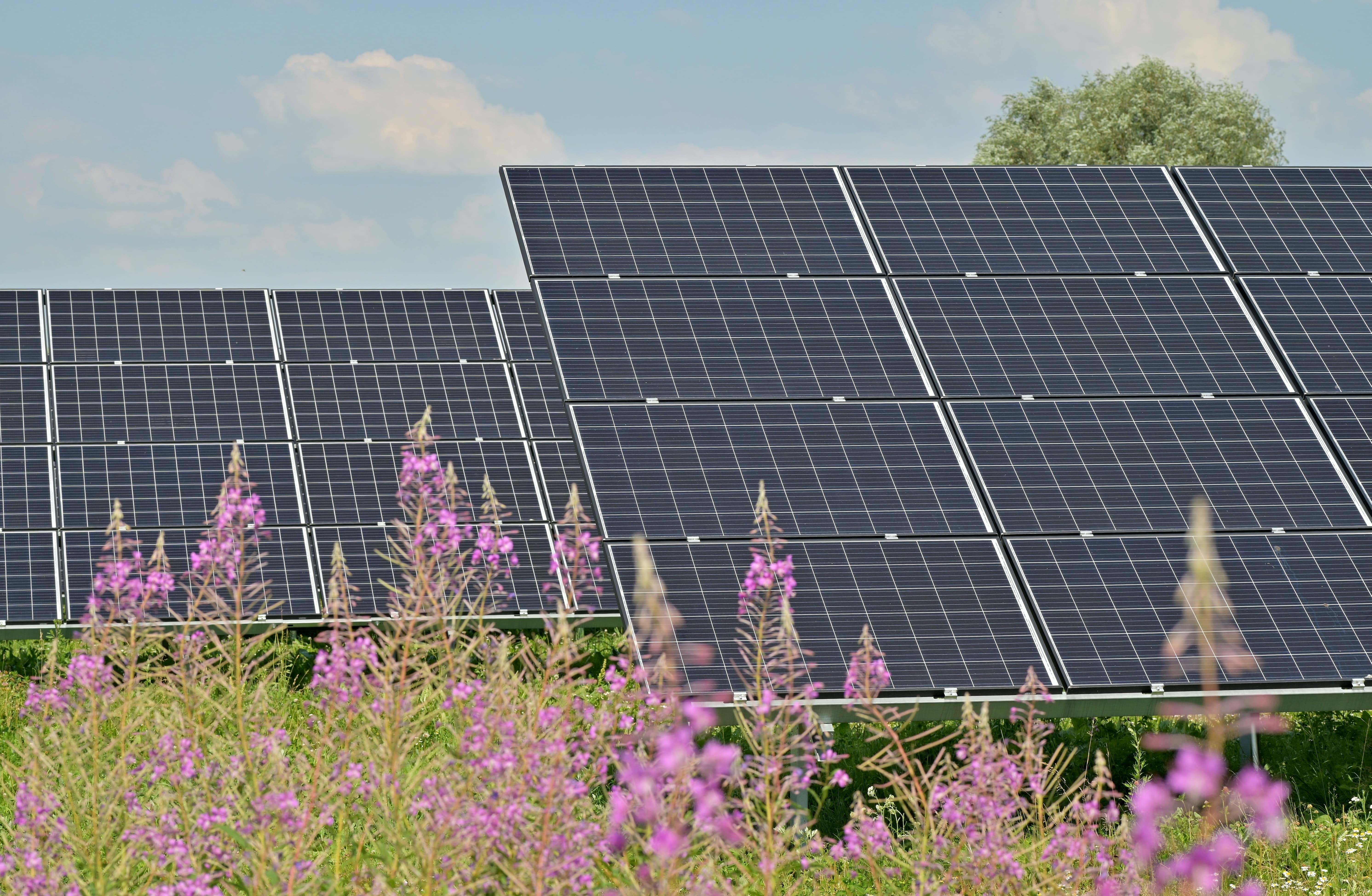 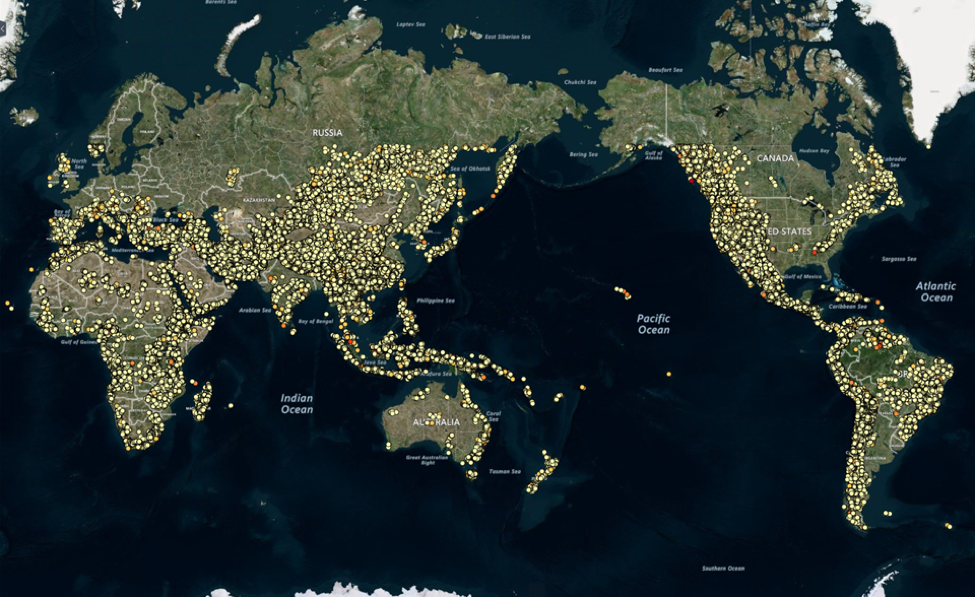 None of the PHES sites discussed in this study have been the subject of geological, hydrological, environmental, heritage and other studies, and it is not known whether any particular site would be suitable. The commercial feasibility of developing these sites is unknown. As with all major engineering projects, diligent attention to quality assurance would be required for safety and efficacy.

There has been no investigation of land tenure apart from exclusion of some environmental areas and urban areas, and no discussions with land owners and managers. Nothing in this list of potential site locations implies any rights for development of these locations. Accuracy of the sites depends on the accuracy of the source data. There may be sites that fall into protected areas or urban areas that are not identified by the source data. In coastal regions there may be a few lower reservoirs sitting on top of the ocean due to limited accuracy of the DEM data.

The results of our survey are shown in Figure 2. Most regions of the world have large numbers of potential sites nearby. PHES is mature off-the-shelf technology and is much cheaper than alternatives for large-scale energy storage. Solar PV and wind are in 1st and 2nd place respectively in terms of annual global net new capacity additions. PV, wind, PHES and high voltage DC and AC transmission together represent mature technologies that can reach 100% renewable electricity at modest cost [2], allowing large greenhouse gas emissions reductions.

Fig. 2. Energy storage potential by UN geo region [3] in units of Gigawatt-hours (GWh) per million people. A rough approximation of the storage required to support 100% renewable electricity for an advanced economy is 20 GWh per million people. Melanesia (42,000) and Canada (25,000) are off scale.

How much storage is needed?#

Potential sites for off-river PHES are identified using GIS algorithms [4] with defined search criteria. The surveyed latitude range is up to 60 degrees north and 56 degrees south [5]. For each reservoir the following attributes are identified:

For each pair of upper and lower reservoirs the following attributes are identified:

Wall heights are adjusted for each reservoir in a pair to yield equal water volumes to achieve the targeted energy storage. Energy (= head * volume * density * g * efficiency) and storage-length combinations are provided in Table 1. The last line is the approximate number of people that the reservoirs could service for a 100% renewable electricity grid (see “How much storage is needed”).

Each reservoir pair is ranked A, B, C, D or E according to an approximate cost model. More expensive schemes than rank E are not included. Rank A reservoir pairs would be expected to cost around half that of rank E. Larger systems are generally more cost-effective than smaller systems. The main cost components are:

The algorithm considers all possible pairs within a region, calculates the best pair according to a cost model, and works downwards in ranking. Each upper reservoir is paired with the best available lower reservoir. This explains why some water conveyances (e.g. a B-class pair) bypass a close reservoir and go to a more distant reservoir (e.g. because the “nearby” reservoir forms part of an A-class pair).

Virtually all upper reservoirs are away from rivers, and none intrude on the national parks or urban areas listed in the databases that we use. However, many of these databases are out-of-date or incomplete.

Land and water use#

Legacy fossil fuels can support and balance an electrical grid with a large proportion of variable renewable energy (solar PV and wind). However, as the renewable fraction approaches 100% then substantial storage is needed. Analysis of Australia showed that about 500 GWh of storage is needed to balance a 100% renewable electricity grid for 25 million people that includes strong interconnection over large areas (to smooth-out local weather) [2]. If the storage is mostly in the form of pumped hydro then 2-5 km2 is required per million people for the upper + lower reservoirs. This is smaller than one tenth of the area of land required for the corresponding solar and wind energy systems that the storage supports. Most of the identified sites are not near significant rivers. Larger reservoirs (50-150 GWh) are more economical with land than smaller reservoirs.

The water requirements of a renewable electricity system relying on PV, wind, pumped hydro storage and wide-area transmission is far less than for a corresponding coal-based system because cooling towers are not needed for renewables. An initial fill of a pumped hydro system is required, of about 20 Gigalitres per million people (based on analysis for Australia). This water is retained indefinitely in an off-river (closed-loop) pumped hydro system. In some areas annual evaporation exceeds rainfall and will need replacement. Evaporation suppressors can be used. The volume of water required to replace evaporation is a small fraction of agricultural water use and is far less than used in an electricity system based on coal.

Many or even most potential pumped hydro sites may prove to be unsuitable. However, fewer than 1% of the identified sites are required to support a 100% renewable electricity grid. Developers and approval authorities can afford to be choosy.

The following aspects (amongst others) are being worked on:

In publications or developments that use this information please acknowledge the RE100 Group, Australian National University, http://re100.eng.anu.edu.au.

Support from the Energy Transition Hub https://www.energy-transition-hub.org/, the Australia Indonesia Centre (https://australiaindonesiacentre.org/) and the Australian Renewable Energy Agency (https://arena.gov.au/) is gratefully acknowledged. NationalMap [5] is supported by Geoscience Australia and CSIRO/Data61. Special thanks is due to Mats Henrikson of Data61 (https://www.data61.csiro.au/) for mounting the data on NationalMap. Thanks also to David Singleton.